By Paul Castillo on May 5, 2014 in Saltwater Fishing (LeeRoy)

When they are first hatched from the egg they swim upright and have one eye on each side of their head like all other species of fish. At about five weeks of age and one inch in length, one eye “migrates” over the top of the head so that both eyes are on the same side of the head. At this time the juvenile Halibut “lays over” on its’ side with both eyes on the upward or top side. As the fish grows the under side becomes white, the top side becomes a mottled darker variation of colors resembling the sea bottom, and their body flattens into an oval shape: thus the nickname “Flatfish”.

Some persons unfamiliar with this specie may think there are 2 distinct species because one is brown and the other is white. As mentioned above the underside is white as it is laying on the bottom most of the time and the top being brown to camouflage itself against the bottom. For some reason many fishermen seem to photograph these fish in the white.

The Pacific Halibut, upon becoming a mature spawning adult average about 25 to 30 pounds in weight. They spawn during the winter months in about 1,200 feet of water. The males range upward to about 60 pounds and the females range upward to about 600 pounds in weight. Huge Pacific Halibut, known as a “Barn Door”, can attain a length of over 8 feet and a width of over 5 feet. They have a button-sized calcified deposit in their head called an Otolith or “Ear Bone” that forms an annual growth ring. The age of an individual fish can be determined by counting the number of growth rings as you would age a tree. They can attain a lifespan of over 30 years. Halibut are predatory feeders that eat almost everything that swims in the sea. Their snow-white flesh makes excellent table-fare. This makes them a very popular game-fish species with deep-sea fishermen. The Official Alaska State Record Halibut is 459 pounds-0 ounces.

Life Cycle ; Halibut spawn at depths of 600 to 1,500 feet from November through March. Female halibut release anywhere from a few thousand to 4 million eggs, depending on the size of the fish. About 15 days later, the eggs hatch and the larvae drift with deep ocean currents. In the Gulf of Alaska, the eggs and larvae drift in a counter clockwise direction along the coast.

As the larvae mature, they move higher in the water column and ride the surface currents to shallower, more nourishing coastal waters.

Although age at maturity varies over time, about half of male halibut are sexually mature by 8 years of age, while half of the females are mature by age 11. 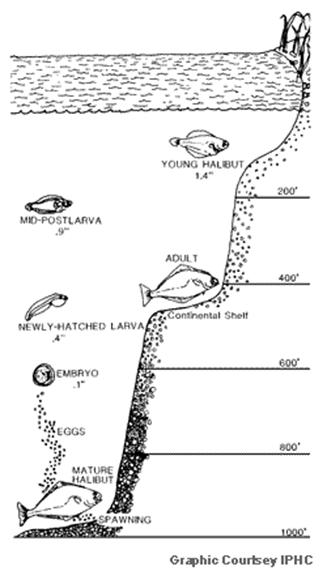 Eye Migration ; The larvae start life in an upright position like other fish, with an eye on each side of the head. When the larvae are about one inch long, the left eye moves over the snout to the right side of the head. At the same time, the coloration on the left side of the body fades. The halibut end up with both eyes on the pigmented (olive to dark brown) upper side of their body, while their underside is white. By the time they are six months old young halibut settle to the bottom in shallow, near-shore areas.

Size & Age ; Halibut are the largest of all the flatfishes. Some halibut exceed 400 pounds, including the 459 pound state record fish caught during 1996 in Unalaska Bay.

Female halibut grow faster and are typically larger than males of the same age. Most halibut taken in the sport fishery are 5-15 years old. Males rarely reach 100 pounds.

Halibut age is estimated by counting growth rings laid down in the fishes’ “otolith,” a bony structure in the inner ear.

Halibut are usually on or near the bottom over mud, sand, or gravel banks. Most are caught at depths of 90 to 900 feet, but halibut have been recorded at depths up to 3,600 feet. As halibut mature, they migrate in a clockwise direction in the Gulf of Alaska, countering the drift of eggs and larvae. Halibut tagged in the Bering Sea have been caught as far south as the coast of Oregon, a migration of over 2,000 miles.

Halibut also move seasonally between shallow waters and deep waters. Mature fish move to deeper offshore areas in the fall to spawn, and return to nearshore feeding areas in early summer. It’s not yet clear if fish return to the same areas to spawn or feed year after year.

Since 1923, both the sport and the commercial halibut fisheries have been managed under a treaty between Canada and the United States.

The Role of the International Pacific Halibut Commission

The treaty established the International Pacific Halibut Commission (IPHC), which is charged with the conservation of halibut. The IPHC conducts research and sets the allowable catches for each of ten regulatory areas from Oregon to Alaska.

The Role of the North Pacific Fishery Management Council

The NPFMC is one of eight regional councils established by Congress in 1976 to oversee management of the nation’s fisheries. The Council has eleven voting members, six from Alaska, three from Washington, one from Oregon, and a federal representative, the Alaska Regional Director of NMFS. The Council’s office is in Anchorage, Alaska.

Once the IPHC has set the allowable halibut catches for each area, it is up to the Council to portion out the harvest between sport, commercial and subsistence users who fish U.S. waters. The Council can also set daily bag and possession limits for halibut in U.S. waters.

F&G’s Role ; F&G collects sport fishery data and provides it to the IPHC and the NPFMC to help them in making management and allocation decisions.

Your Role ; You can ensure that management agencies are using the best possible information by responding to surveys, providing accurate information if interviewed by fishery technicians, and by allowing your fish to be measured.

Tackle ; Stout tackle is preferred for these large, strong fish. Most sport anglers use a heavy-action 5-6 foot rod equipped with a reel capable of holding up to 300 yards of 60-100 pound test line.

The most popular method uses circle hooks baited with herring, fished on the bottom with cannonball weights up to 36 oz. on a slider. You can also use the head, tail, fins, and/or viscera (but only these parts) of sport-caught salmon as bait. Halibut eat almost anything they can catch, so jigging with J hooks baited with octopus or whole herring, or with lead-head jigs or other artificial lures is also effective.

Halibut that are small enough to be lifted aboard can be gaffed. Avoid using a gaff with a straight hook. Stick the gaff in the fish behind the gills and above the gut cavity and pull the fish into the boat in a continuous motion. Be ready to subdue the fish with several good whacks above the eyes and bleed it by cutting a few gill arches, the caudal peduncle (narrow part in fron of the tail), or both. Never gaff a halibut you intend to release.

Very large halibut can be shot in the brain with a small to medium caliber pistol or small shotgun, but make sure you have control of the fish before doing this. The brain is located just behind (toward the tail) the upper eye. Large halibut can also be harpooned or stuck with a shark hook attached to a bullet buoy. The harpoon head must penetrate the fish completely in order to hold reliably. Large halibut can also be subdued without bringing them aboard by tying them to boat cleats with a tail loop and another loop of rope through the mouth and gills. The fish can then be bled outside the boat.

Where to Fish ; Success rates vary widely from vessel to vessel and from day to day, but good catches are made from mid-May through mid-September throughout Alaska.

Many believe the best fishing is just before, during, and after high slack tide. This is the easiest time to keep your tackle on or near the bottom. Use modern, small diameter lines to minimize stretch and drag when fishing deep or in heavy currents.

How Old is My Halibut ? Females grow faster than males, but just like people, there is a lot of variation between individual fish. Check the chart for average ages at selected lengths.

How Do I Tell the Sex of a Halibut? ; Examine the gonads located on either side in the tail end of the gut cavity. In females, the ovaries appear as triangular, hollow pinkish sacs. In males, the testes appear as solid (not hollow) gray or light brown, rubbery-looking masses of tissue, not unlike earlobes.

What is a “Chalky” Halibut? ; It is not a health hazard. The flesh of chalky halibut is a bright, opaque white color, rather than translucent like normal flesh. When cooked, chalky halibut is drier, but has acceptable flavor and higher oil and protein content.

Chalkiness is rarely visible when the fish is boated but develops over a period of hours. It is caused by a buildup of lactic acid, which reduces the ability of flesh to retain water. Important factors may include exhaustion, water or air temperature, and handling. Chalkiness is also more prevalent in August. Overall occurrence in Alaska is about 5%. To minimize chalkiness, kill and ice your fish promptly upon landing.

How Much Edible Meat Can I Expect to Get From a Halibut? This depends somewhat on the skill of the filleter, but your skin-on fillets should be 50-60 percent of the weight of the fish. Don’t forget to remove the cheeks, they’re great!

How Well do Halibut Survive Catch-And-Release? Halibut do not have a swim bladder and do not suffer severely from changes in water pressure. The survival rate of halibut caught on sport gear and released in excellent condition (not gaffed!) is believed to be at least 95%.

What’s Wrong With My Halibut? It’s Skinny, Has Big Teeth, And Turns to Mush When I Cook it. Your “halibut” may in fact be an arrowtooth flounder which are common in south central Alaskan waters but not as common in Southeast. They are often confused with small halibut. Arrowtooth flounder have a more pointed head, larger scales, and a longer mouth with numerous needle-like teeth. They turn soft when cooked because heat activates an enzyme in the fish that breaks down the flesh.

What Do I Do if I Catch a Tagged Halibut? ; Halibut are tagged by the IPHC to study movements and by local derby officials. You are not obligated to either keep or release a tagged fish. If you release it, cut off the tag without injuring the fish, and note the location and date.

If you keep the fish, leave the tag on and try to contact an IPHC or your Fish and Game port sampler when you get to shore. You can also send the tag, along with length (measured from tip of snout to middle of tail), date, location (lat./long. preferred), depth, sex of the fish, gear type (sport), and port of landing to the IPHC.